It’s strange the way patterns emerge, if indeed that it was what they are. Sometimes, things just happen; a set of circumstances, coincidences even. But there are times when it does seem possible to look back on a string of disparate episodes and see in them some kind of connection, no matter how loose.

If this all sounds a touch meandering and mysterious, then please bear with me. What got me thinking about all this was the approach of Christmas. For me, Christmas is a nostalgic time. It brings out the child in me; that sense of eager excitement in watching loved ones drawing away the paper wrapping to reveal some hidden delight. 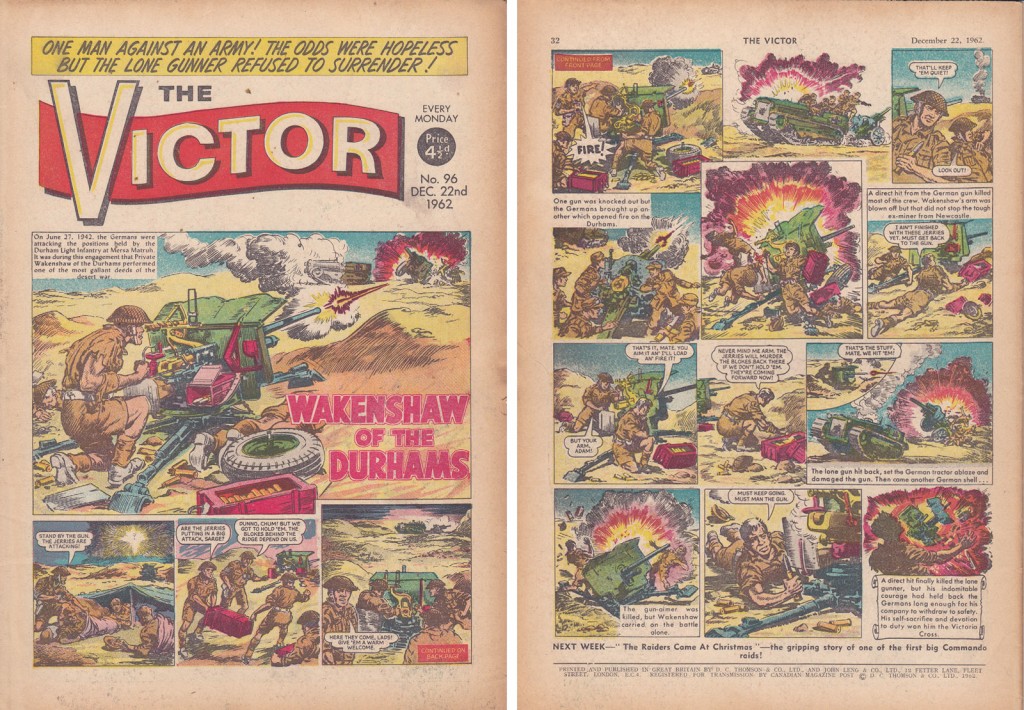 In my case, as a child the greatest thrill was the anticipation of receiving one present in particular. It was the gift I will forever associate with Christmas, the gift without which no festive celebration would have been complete. It was, of course, the Christmas comic annual. And not just any old annual: it had to be The Victor Annual for Boys.

Every year, from 1964 until I can’t quite remember when, it was the undoubted highlight of Christmas Day. It never mattered that the one-off picture-strip stories were little different from those served up as weekly fare in the comic itself. In fact, their very familiarity was part of the charm, part of the anticipation. You knew what to expect and you knew they wouldn’t let you down. There was never any danger of disappointment in a Christmas to be shared in the company of Alf Tupper, Matt Braddock and Morgyn the Mighty. With them, you could win Olympic gold, defeat the Luftwaffe and perform miraculous feats of strength in some far-off land and still have time to stuff your face with turkey and all the trimmings as well as indulging in the odd game or two of Monopoly.

It was, quite simply, the best entertainment of all; better than all the comedies, soaps and superstar movies put together. But what I couldn’t have realised then was the rather remarkable role that The Victor would play – and continues to play – in shaping my life and interests. And this is where a pattern of sorts emerges to connect Christmas now and then with my professional career as a writer. 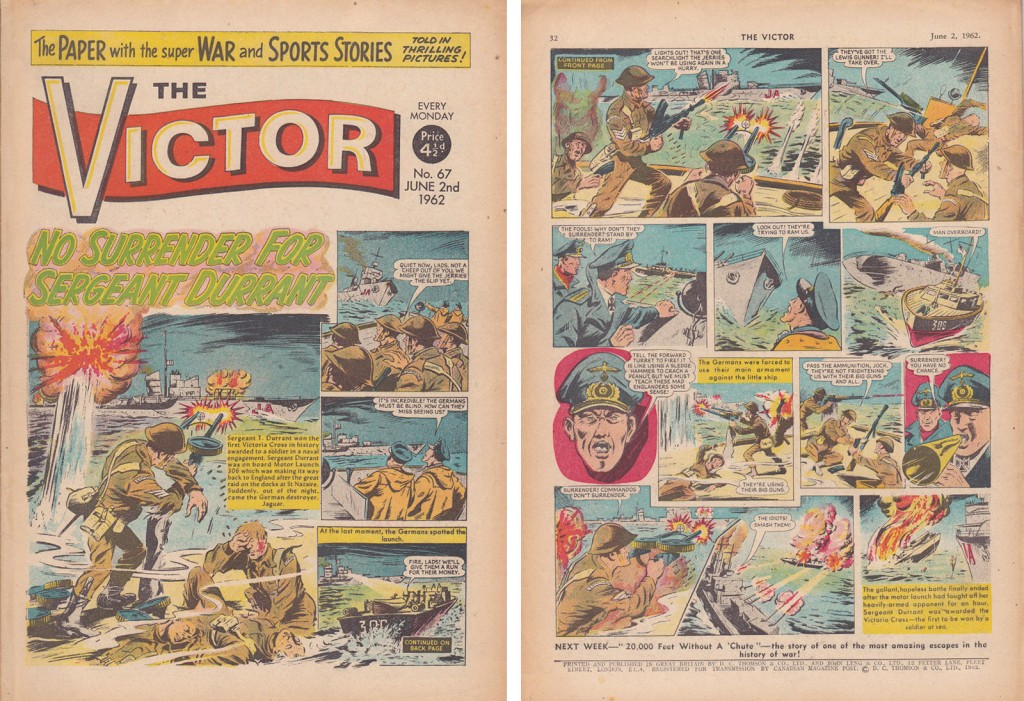 Who would have thought that a comic I first read as a six-year-old would inspire an interest in the life of Eric ‘Doc’ Harden VC; an interest which would culminate this year in my first biographical book in which, of course, The Victor’s original back and front cover treatment appears? But the link doesn’t end there. Only the other day, I completed an article which is scheduled for publication in the Eastern Daily Press next week. Pegged on an excellent new book about Second World War submariner VC Godfrey Place, it focuses on the role performed by a young Norwich officer who served aboard Place’s X-craft during an heroic attack on the German battleship Tirpitz. To illustrate the article, I had the usual array of photographs, courtesy of the book’s publisher, but I couldn’t resist adding the more graphic version that I originally read as a boy in The Victor of March 9, 1963 – The Hero of X-Craft Seven. Whether or not, it actually makes it into next weekend’s EDP we shall just have to wait and see.

And then there are the articles planned for next year. One in particular concerns an act of battlefield valour which is inextricably linked to a mind’s-eye image that I have carried with me in my head since I was a child. It is of a young officer, his uniform torn by bullets, leaping into a German gun-pit with nothing more than a dagger and a revolver. Ever since I first clapped eyes on Victor No 77 and read the story of Lord Lyell VC, I have been fascinated by his extraordinary act of heroism. In part, I suspect it had much to do with the wonderful art work of Harry Farrugia, for me, The Victor’s pre-eminent comic-strip artist. But more about him later, for the time being my focus remains on drawing out the real-life story of another of my comic-strip heroes which form part of The Victor’s enduring legacy. 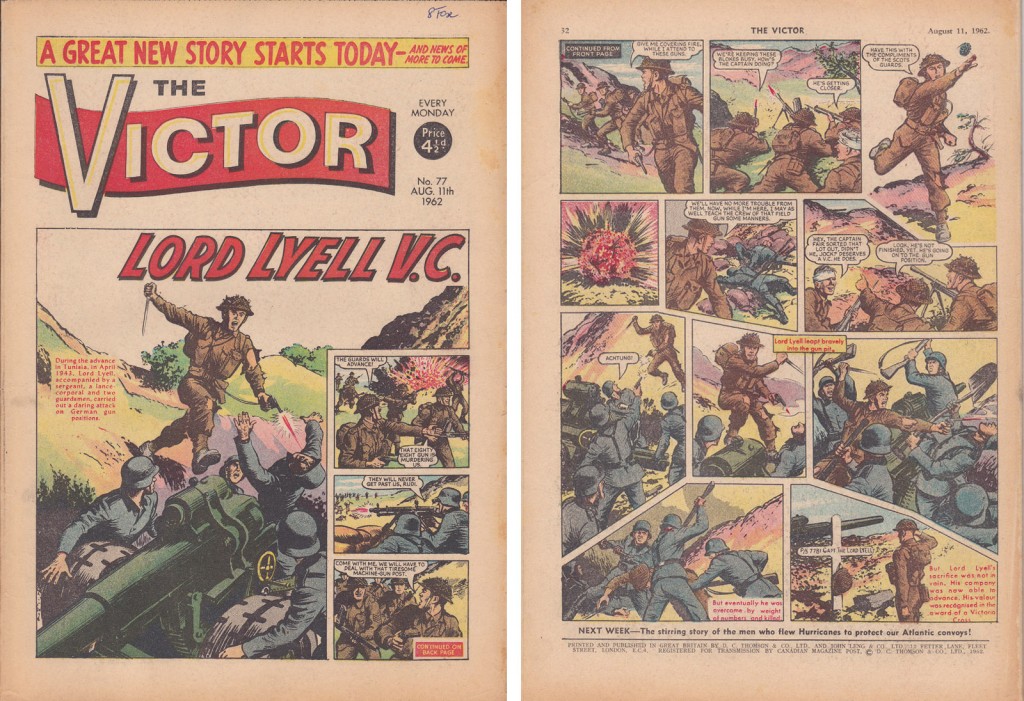