Batu Pahat isn’t a place that features in too many tourist guidebooks. Indeed, mention it to most western travellers and the most likely response is a blank ‘never heard of it’ kind of expression. The same would have certainly been true for most members of the hapless 53rd Brigade who found themselves hurried out of Singapore onto the road to northern Johore in the middle of January 1942. 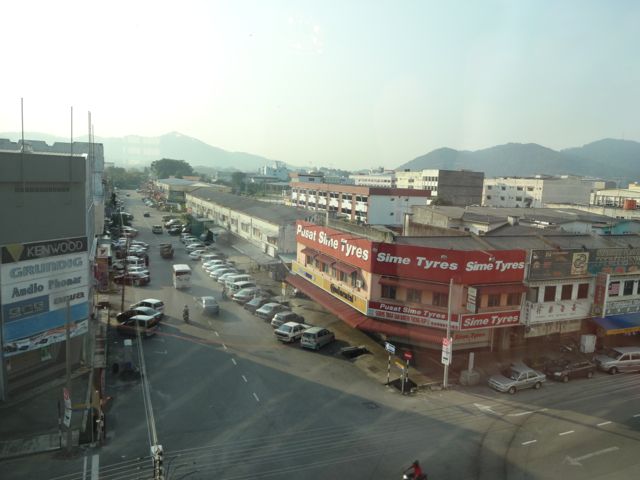 The centre of Batu Pahat with the high ground that the Japanese sought to capture.

My journey of discovery aboard a rather roomy bus from Johore Bahru’s Larkins terminus was, I suspect, altogether more comfortable than that taken by territorials from Cambridgeshire and Norfolk hastily despatched north in a desperate effort to stem the Japanese advance 70 years ago.

Together with my wife, Sandra, I was headed in search of the positions they had held during their first unsettling encounters with an emboldened enemy buoyed by their successes further up-country during the first few weeks of the Far Eastern war. 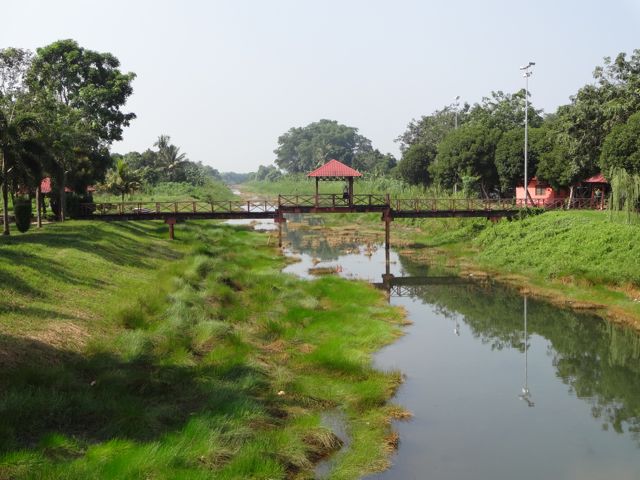 The view westwards from Senggarang bridge. Many of the 53rd Brigade headed this way en route to the sea and evacuation.

It wasn’t going to be plain sailing. Much, of course, has changed in the seven decades since patrols from the 5th Royal Norfolks patrolled the roads leading out of Ayer Hitam and Yong Peng and the 2nd Cambridgeshires sent small parties to ‘recce’ the forested areas around Batu Pahat. Indeed, Batu Pahat has altered almost beyond recognition from the rough sketch plans I had faithfully copied from a Cambridgeshire officer’s wartime diary. But, as I soon discovered, when we stepped off the air conditioned bus into the sweltering heat of northern Johore, certain landmarks remain unaltered – most notably the river that the Cambridgeshires were sent to guard and the surrounding hills. 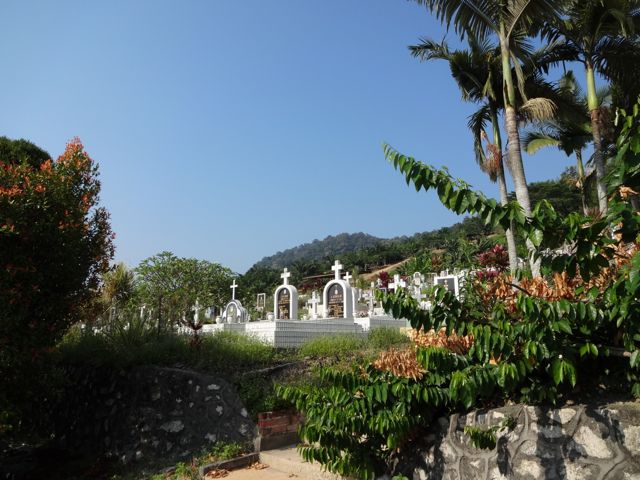 Chinese cemetery near Batu Pahat that is believed to have been the scene of heavy fighting in January 1942.

Helped by the local harbourmaster and his friendly assistant, we were guided along the course of the river as it heads out into the Malacca Straits, beneath the old and the new lighthouse (part financed by the Japanese, irony of ironies). On a day of baking sunshine and unbeatable hospitality, it was difficult to imagine this heavily wooded landscape – not as much jungle as plantations, these days – as a war zone, yet all too easy to understand how small forces of Japanese could have landed unobserved and melted into the green smother, infiltrating between the thinly spread units scattered about Batu Pahat. 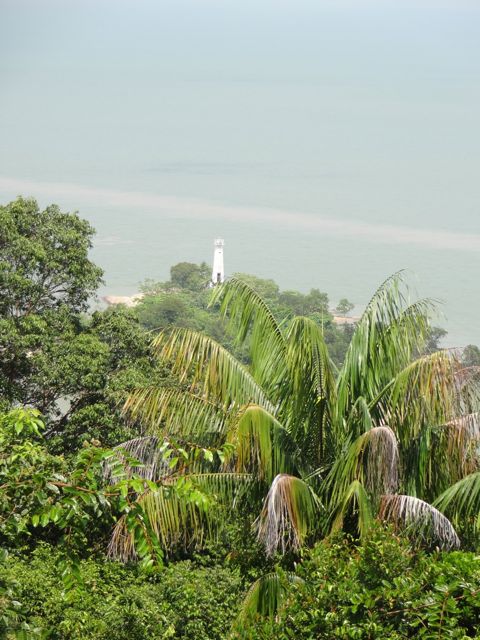 Looking down on the old lighthouse and the Straits of Malacca near Batu Pahat.

Having made our own slow progress, past an assortment of deserted food courts, a closed computer café and customs offices, we looked out across the muddy waters to the far bank where some kind of dredging appeared to be going on in preparation for further development. The first thing that struck me was the breadth of the river. It was far wider than I had imagined and it seemed as though a good deal of tree clearance had taken place, though how recently I could not say. On the face of it, the river seemed to afford great advantages for defenders and immense difficulties for any force trying to make an opposed crossing. All the more reason, therefore, for the Japanese to render such an operation unnecessary by out-flanking the defences. 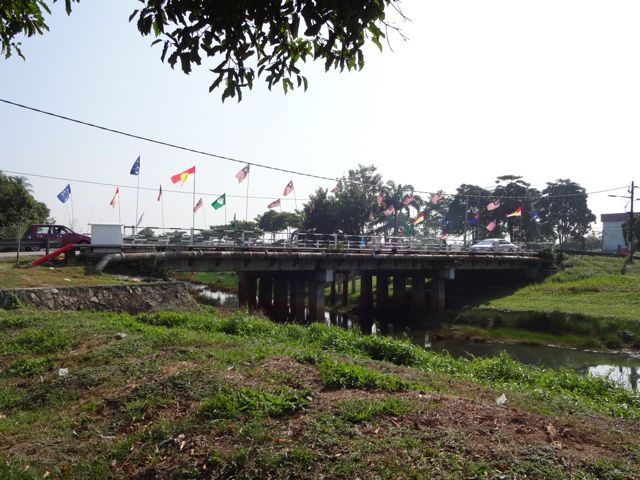 The bridge at Senggarang. The original wartime bridge was blown up by 18th Division engineers.

For all their efforts to forestall any further Japanese advance, the Cambridgeshires and Norfolks found themselves fighting not on the riverside but on the heights to the south and east of the town. So, it was to these points we headed on our second day’s battlefield tour. Thanks to a driver arranged by an extremely helpful manager at the B & S Boutique Hotel (if you ever venture to Batu Pahat in search of the authentic Malay experience, be sure to stay at the BS!), we headed initially southwards on the road to Senggarang. First stop was a Chinese cemetery where small parties of the Cambridgeshires and Norfolks had sheltered during the confused fighting for the high ground overlooking the brigade’s line of retreat. These days, Batu Pahat sprawls much further south along the road, but the brooding hills remain, much taller than I imagined. Much of the forest – the East Anglian troops always referred to it as jungle – which fringed the road in 1942 has been cleared to make room for more development, but there is still enough to give an impression of what it must have seemed like to the disorientated soldiers as they trudged warily and wearily south only to find themselves cut-off at a small village called Senggarang.

The view westwards from Senggarang bridge. Many of the 53rd Brigade headed this way en route to the sea and evacuation.

Today, Senggarang is larger than it was in 1942, but remains relatively small. A new bridge straddles the river where the old one was blown by 53rd Brigade engineers in order to slow the chasing Japanese. In the prickly heat of mid-morning we trekked around the blocks of concrete buildings and parades of shops that have long since replaced the mainly wooden buildings that once lined the main road and gave shelter to the wounded 70 years ago. Hopes of finding some evidence of what had occurred here all those years ago were sadly dashed, but at least we were able to get a sense of the place and a sight of the swampy country into which hundreds of East Anglians retreated, leaving their transport wrecked and ablaze on the edge of the road. 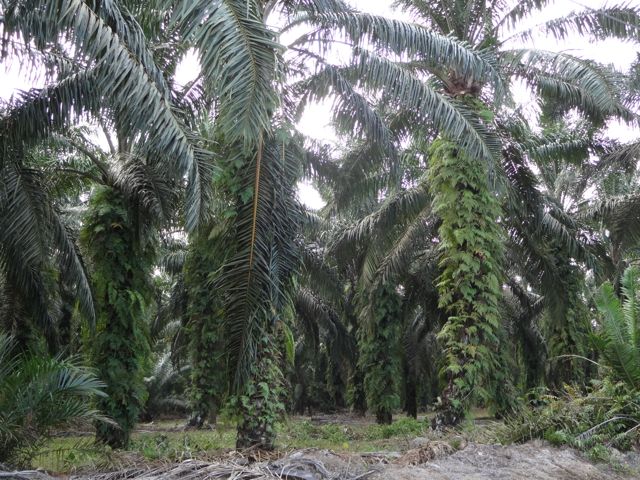 Plantations south east of Senggarang. Near here Japanese blocks barred the way south and led the British and Indian troops to abandon their transport and head into the jungle.

Turning about, we drove back to Batu Pahat before heading north-east to the bridge at Parit Sulong, scene of an infamous massacre perpetrated by the Japanese against wounded Australian and Indian troops left behind by the force falling back from the River Muar. A memorial plaque placed there by the 2/19th Battalion Association of the AIF offers mute testimony to the grim struggle that took place here. Just like the Cambridgeshires at Batu Pahat, the Australians found, to their cost, that the Japanese had infiltrated behind them. The bridge which should have been held by units of the 53rd Brigade had been abandoned and the Japanese took full advantage of the 53rd Brigade’s indiscipline and lack of combat experience to occupy the position without a fight. From there, we ventured towards Yong Peng in search of the Bukit Pelandok defile that had been defended none too well by the 6th Royal Norfolks. It proved something of a disappointment. Our taxi driver had never heard of it and, though we saw evidence of steep hills rising from the flatlands, we were unable to locate this strategically important position whose capture by the Japanese did much to shake morale and prise open the brittle British defences in northern Johore. 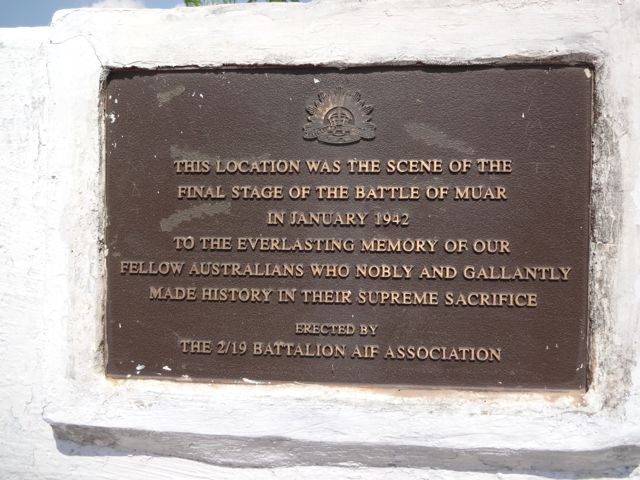 Australian plaque on the bridge at Parit Sulong, scene of fierce fighting and a brutal massacre of wounded. 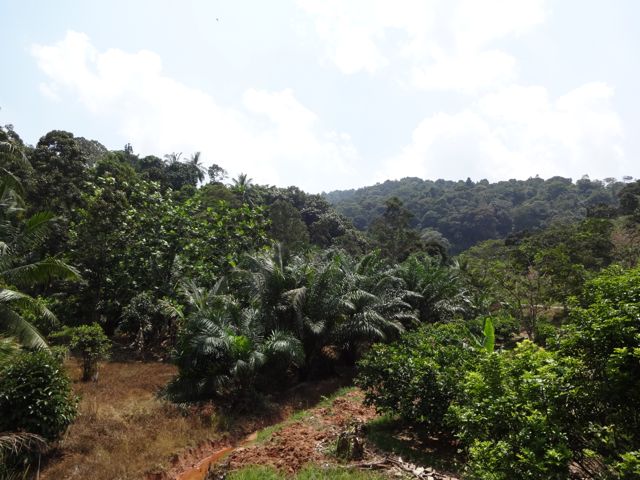 The hills on the side of the road between Parit Sulong and Yong Peng give some idea of the difficulties facing the newly arrived 53rd Brigade.