The wonder of the internet never ceases to amaze me.

When I embarked on my Norwich Blitz odyssey almost two years ago my head was filled with familiar images lifted from more than three decades of journalism. Most were stark, black and white photographic studies of destruction taken from the outstanding George Swain collection. But a few were paintings; wild, garish canvasses that contrived to turn incendiary-stoked fires into pictures of haunting beauty.

They were the work of Stanislaw Mikula, an enigmatic Polish soldier-artist who fate had placed in the city at the height of the Baedeker raids. 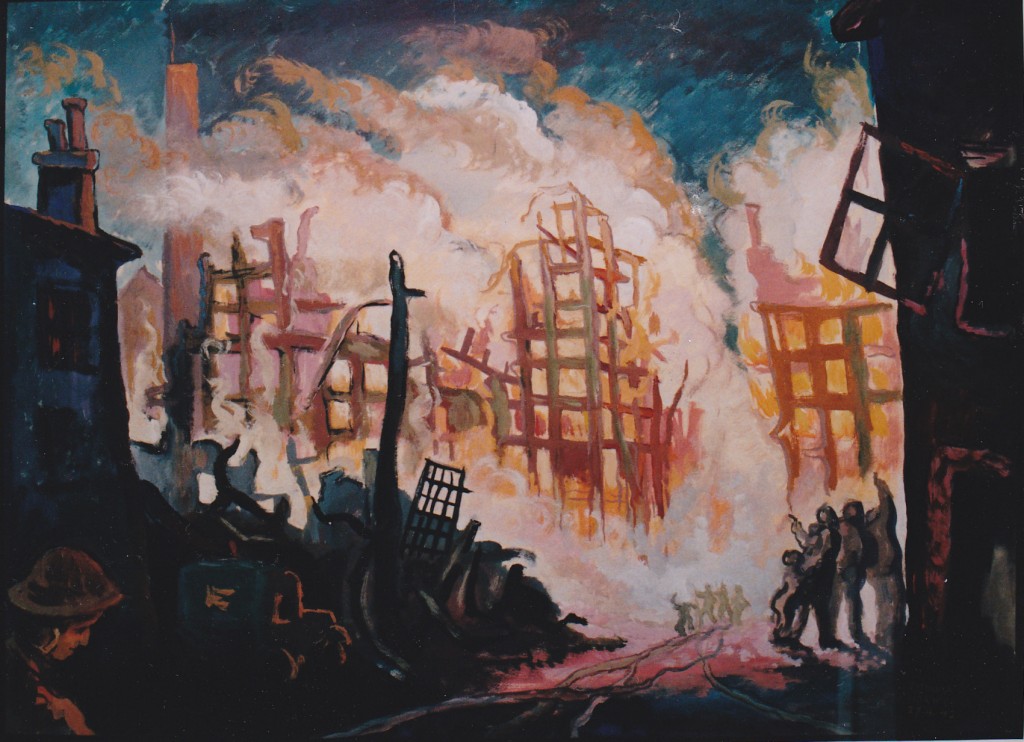 My first glimpse of his stunning work was entirely by chance. One of his paintings was featured in an exhibition at the Norwich Castle. In an article inspired by my discovery I wrote of being held “spellbound” by the painting:

“At its heart was a great swirl of vivid colour and the contorted skeleton of a factory smothered in flames and a pall of smoke that seemed to hang like a translucent shroud in the night sky. Slowly, I began to take in the rest of the painting. The dark jumble of buildings reduced to twisted rubble. A window hanging loose, tilting at a crazy angle. And a trail of hose-pipes snaking through the debris towards a huddle of figures dwarfed by the catastrophe they are powerless to contain.

There was no escaping the fierce intensity of that pink and orange inferno, so dazzling you could almost feel the searing white heat.

I had seen this tortured scene many times before, but never like this…”

The painting was of Caley’s chocolate factory being consumed by flames during the second terrible Baedeker raid at the end of April 1942. It was, as I found, one of six large-scale works held by in the Castle Museum’s collection. Surprisingly, given its dramatic rendering of one of the most iconic moments in the city’s wartime history, it had been rarely displayed during the previous 50 years.

It made me want to find out more about Norwich’s unsung Polish Blitz artist.

Who was Stanislaw Mikula? I did some digging with the help of Norma Watt, then assistant keeper of art at the Castle Museum. I discovered that before the war he had specialised in ecclesiastical art and portraiture and had studied in Paris with Andre Derain, a friend of Matisse and prominent member of the Fauves Group who turned impressionism into an exaltation of pure colour.

But what of the character of the man? He remained frustratingly elusive. The fragments unearthed pointed to a charismatic figure and a chequered life; he was jailed for four years for defrauding a friend out of more than £60,000 to pay off gambling debts, he owned a night club in Mayfair, he was married to a Polish singer and apparently died in London in 1977 after falling down a spiral staircase while attending a friend’s party.

The only flesh to add to these bare bones came from a Liverpool-based artist. Patricia Rhodes had known Mikula during the war and had kept in touch with him to the end of his life. She laughed as she recalled how, while serving his prison sentence, he had painted the portrait of the governor. “You couldn’t keep him down,” she said. “He was very flamboyant and he was a very good artist too. He could really paint if he put his mind to it, but he enjoyed the high life too much…”

And that was broadly it. 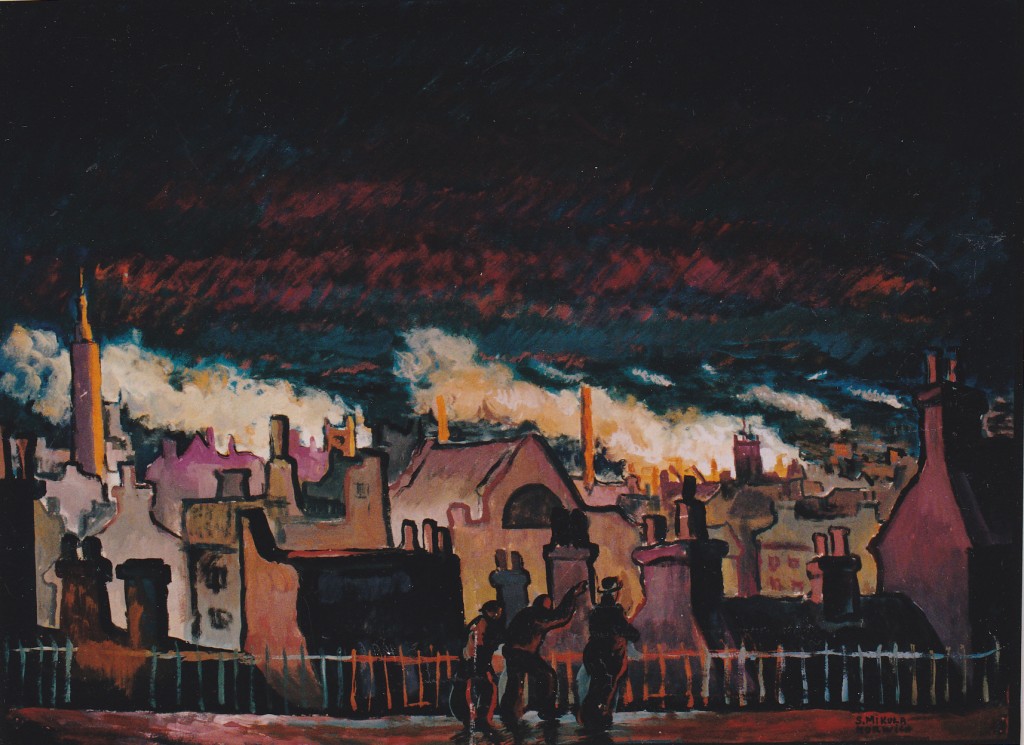 When I came to write Norwich: A Shattered City I had hoped to write of Mikula and his extraordinary life, but in the end there was not space enough and I had to content myself with publishing a few black and white images of his work which scarcely did justice to his immense talent. I began to think in terms of featuring in him a new book, loosely based on eyewitness accounts of the air raids on Norfolk during the second world war. But with my biography of Doc Harden VC taking up most of my time, I had done nothing more about it when, out of the blue, I received a ‘response report’ to this website from a Charles Coupland in Australia.

He had read my blog about the Norwich Arts Centre exhibition which featured some of Mikula’s work on a computerised ‘loop’. And what he had to say fair took my breath away…

“I am Stanislaw Mikula’s son… He was my biological father. I grew up in the South of England… away from Stash. It was very pleasing to see him publicly recognised in his adopted country. Before the Norwich Exhibition I had no idea he was even in Norwich during the blitz there…”

Since then, he has emailed me some more biographical information, pieced together from his own research over the past 12 years, after discovering that Mikula was his father.

This is what he had found out:

Stanislaw’s father was Wadyslaw Mikula (described in Stash’s Army record as a Public Official) and his mother was Irma Mikula (nee Grabowski). As far as I know he had a brother called Alfred.

At some point this Polish family moved to Lvov where young Stanislaw grew up in what was then part of the Austro-Hungarian Empire.

In the 1920s Stanislaw went to Paris and studied at the Ecole des Beaux Arts.  On returning to Poland he worked as a painter, a stage designer for theatre, as well as working on the decoration of synagogues and churches.  I have talked to an old friend of his from this period who still lives in London and we described much of that period as a happy one for he and his friends who enjoyed a fair bit of drinking and general roistering.

During the late 1930s he was a cadet officer in the Jazowieckich 14 Cavalry Regiment.

At the outbreak of WW2 he and the Cavalry Regiment managed to escape from Poland eventually ending up in France where they became part of the French Army.  While in Brittany Stanislaw painted a Black Madonna for the small town where the Regiment was billeted.  (I haven’t had the opportunity to see this work even though I’ve been in France a number of times over the last few years).  How he arrived in UK I don’t know.

Now part of the British Army, his Regiment was sent to Biggar in Scotland.  He painted a field altar for his Regiment which stayed in Scotland until the fall of Communism in Poland.  It is now housed in a girl’s boarding school run by nuns at a place called Szymanów not far from Krakow. 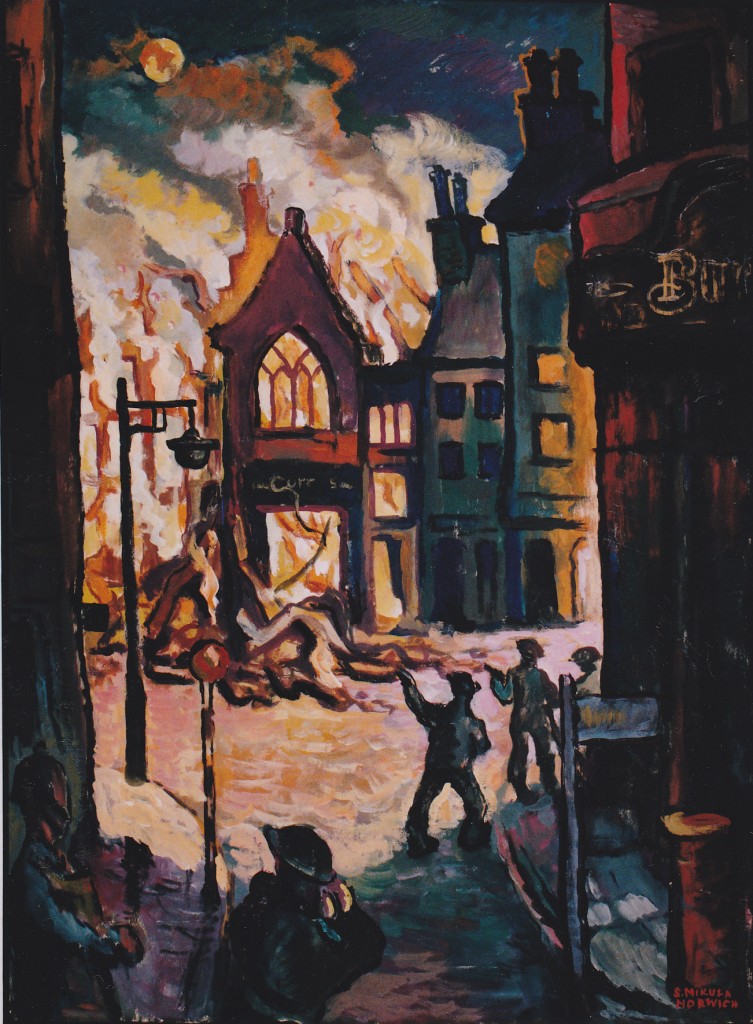 He was in Norwich in 1942 as we know and also in London where at some point he met my mother who worked for SOE as a coder.

He was demobbed in 1946 and worked as an painter, did some film work, eg, in the film starring Ingrid Bergman “Inn of the Sixth Happiness”. He played a Russian train inspector in that film. In fact he contributed stage designs and the occasional performance to Polish theatre in London.

During the 1950’s he managed a night club in Green Street Mayfair. In 1957 he married Sophia Terne a Polish Jewish singer who was the Polish .equivalent of Vera Lynn.  She had travelled with Polish troops and sang for them through their Italian campaign, including at Monte Cassino.  She sang at the Green Street night club which was very popular for a time with film stars like James Mason and people like Princess Margaret.

I believe Stanislaw also did some interior design plans for restaurants as well as himself running a restaurant in South Kensington for many years called Tsarevich.

After his death and funeral at the Brompton Oratory Church in London his ashes were scattered in Poland.

Zoshie (as she was known) Terne died in the early 90’s and is buried in London.”

What an extraordinary story. And it is not over yet. More information and photographs are promised. At long last, it seems, Stanislaw Mikula is emerging from the shadows.