It wasn’t exactly a journey into the unknown, but it has certainly been a journey full of discovery. Our Malaysian odyssey was inspired, at least in part, by a desire to provide a greater understanding of the experiences and ordeals endured by the unfortunate men of the 18th (East Anglian) Division during the second world war.

Known as Churchill’s ‘Floating Division’, they left Britain in October 1941 bound for the Middle East only to be diverted, mid-voyage, to bolster the crumbling defence of Malaya and Singapore after the Japanese entered the war. It was their misfortune to be sent as reinforcements to a lost cause and to fight battles for which they were signally ill-prepared against an enemy about whom they knew precious little.

Over the years, I have read much about their wretched struggles, in the form of diaries and reports that they wrote at the time and in books that were published subsequently. All gave vivid descriptions of the trials and tribulations faced, of the difficulties in combatting not just a battle-hardened and fanatical enemy but an alien climate and inhospitable terrain. Theirs was indeed a miserable fate, abandoned as political pawns to an already doomed struggle. Their war would be remembered not for any glorious victories but for their grim battle for survival which followed the most disastrous defeat in British military history. The ghastly stories of the disease-ridden jungle labour camps have become their enduring legacy as cruel incarceration came to overshadow their active involvement in the war.

For 70 years, their role, not just in the catastrophic Malayan campaign, but in the defence of Britain against threatened Nazi invasion has been largely ignored, misunderstood or misrepresented. I have long desired to right these wrongs by writing a comprehensive account of the 18th Division’s war, from the outbreak of hostilities to the surrender of Singapore and the pitifully few successful escapes that followed. To that end, I have been gathering first-hand accounts and researching contemporary diaries and reports as well as interviewing as many of the dwindling band of survivors as I can. But to fully understand what these men went through I always knew that it would be necessary to visit Malaysia and Singapore, to see for myself the kind of terrain they had to fight in and to experience something of the climate about which they wrote so bitterly.

This year, at last, provided the opportunity and, my goodness, it has certainly given me an insight into the difficulties they must have faced. Just like the majority of those young East Anglian territorials who stepped ashore in Singapore in January 1942, this was my first experience of the tropics and south-east Asia in particular. No amount of reading could have possibly prepared me for the strength-sapping humidity, where the shortest of strolls becomes a sweat-drenching ordeal and where energy seeps away as quickly as the traffic that continually throbs by. To imagine having to run and fight in such conditions is nigh impossible. And then there is the terrain.

My first encounter with the hot, sticky jungle-infested hill country in which the men of the 18th Division found themselves fighting was on Singapore Island, courtesy of Jon Cooper, manager of the ground-breaking Adam Park Project, an archaeological investigation of one of the most remarkable battlefields of the disastrous Malayan campaign. 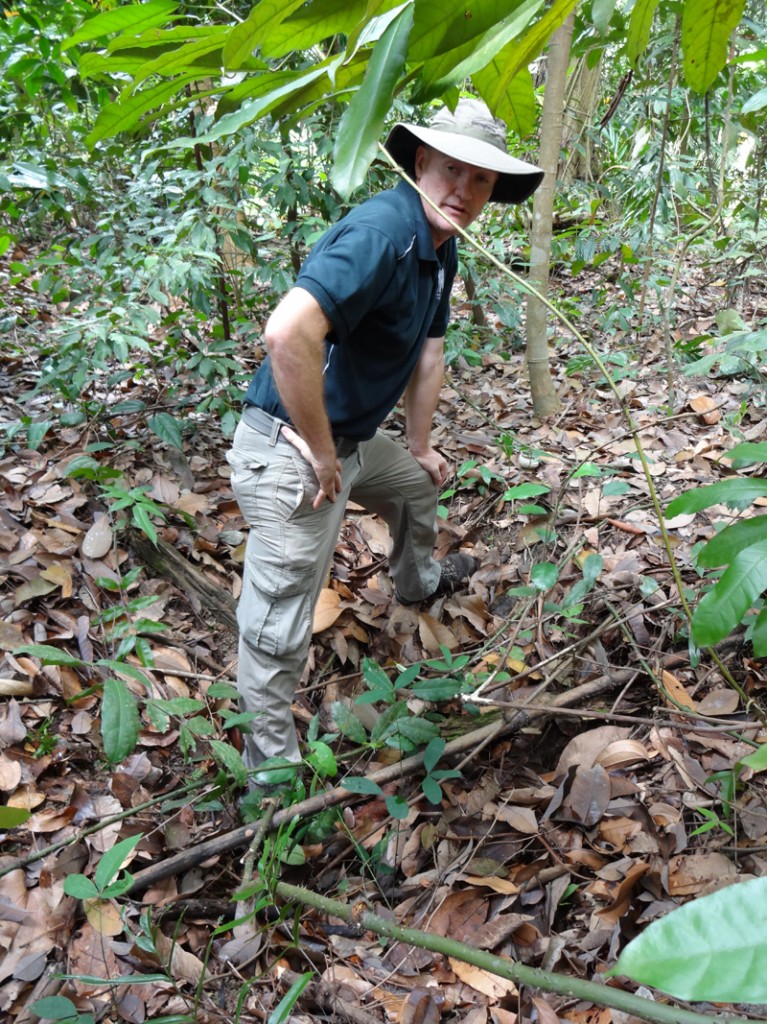 On the trail of the 18th Division: Jon Cooper and one of the scrapings thought to have been manned by the Suffolks during the doomed defence of Singapore

Before making our way to Adam Park, however, we headed to the British Club, not far from the Swiss Rifle Range, scene of the 4th Suffolks’ grisly encounter with a unit of Japanese light tanks. From the roof of the building we had a view across the heavily wooded ground that led towards the heights of Bukit Timah hill. This densely wooded country would have been difficult to advance through for troops well-versed in jungle fighting, but for the men of Tomforce, only recently landed on the island, who had trained for open warfare, Middle Eastern-style, this ground represented a formidable obstacle. It was all too easy to understand units becoming separated and lost and even more easy to imagine Japanese troops infiltrating behind them as they pushed forward.

I couldn’t help thinking of the likes of Tom Eaton and Mike Ashton, officers of the 4th Royal Norfolks, who I had interviewed years earlier, trekking through this wild landscape on their way to the high ground that would mark the limit of their advance. How incongruous my interview with Mike now seemed. In the comfort of a Broadland cottage I recall hearing his terrifying tale of being cut off near Bukit Timah and of having to fight his way back to British lines. Now I was looking at the kind of ground he would have had to find a way through. That he made it back when so many of his men did not was indeed a minor miracle.

The sense of incongruity continued as we made our way to the exclusive Singapore Island Country Golf Club. It was across these gently undulating fairways where golf buggies now roam that Japanese tanks advanced towards the positions occupied by the 18th Division. Fringing the manicured fairways was a tangle of trees and undergrowth through which Jon led us towards some shallow scrapings which he believes could well be the remains of foxholes hastily dug by East Anglian troops who found themselves suddenly pitched into the front line of a struggle that was already lost.

It was the first tangible reminder of the past, but before the day was out there would be many more echoes of the division’s last stand…

The story of my journey in the footsteps of the East Anglian soldiers of the 18th Division will continue in future blogs.

You can find more details about The Adam Park Project (TAPP) on Facebook and a variety of internet sites.