It’s been a while coming. Looking back on my correspondence I can trace the roots of my interest in Eric ‘Doc’ Harden VC to the mid-1990s. It was around that time I began contacting veterans of 45 Royal Marine Commando with a view to publishing something about the only army medic in the Second World War to be awarded the Victoria Cross.

At that time, I was thinking only in terms of a chapter in a wider book. But all those plans were overtaken a few years back by a much more ambitious project, based around the discovery of a treasure trove of letters ‘Doc’ had written before and during the conflict to his wife, Maud, which had been faithfully kept, originally by their son, Bob, and, following his death, their daughter, Julie.

The result is: Commando Medic: Doc Harden VC, published by Spellmount, an imprint of The History Press, which is now available, as the saying goes, in all good bookshops (or at least, I hope it is). Any problems, then get in touch with me!

As contestants on X-Factor are liable to say, it’s certainly been quite a journey.

My only sadness is that more of the veterans who helped me almost 20 years ago aren’t alive to see the conclusion of the project. Men like Don Thomas, who was living in faraway Australia, and Neil Patrick, in Scotland, were great supporters. Neil, in particular, gave tremendous assistance, supplying a wonderfully vivid account of an action in which his own heroism was deservedly recognised with the award of a Military Medal. Two men I would dearly like to have seen the finished book were Bobby Cory, the officer whose life Eric helped to save at the cost of his own, and Johnny Haville, who, along with Dickie Mason, assisted him in his selfless exploit and merited far more than the measly mention in despatches that he was given. Sadly, both passed away during the book’s prolonged gestation. I hope that their families will feel I have done their memory justice.

At least I was able to thank, in person, two of the ‘old stagers’ who helped me – Fred ‘Cabbie’ Harris and Derrick ‘Cakes’ Cakebread. Not only were they able to tell me their own stories, but they were able to guide me through 45’s long struggle from the training grounds of Scotland and southern England, via the beaches of Normandy through to Eric’s final battle in the snow-covered potato fields of Holland. 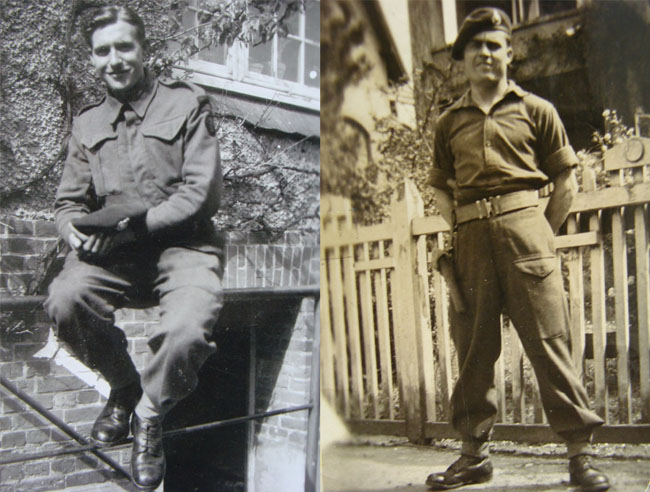 Their assistance has been invaluable and their companionship is something I shall always treasure. Their devotion to honouring the memory of their fallen comrades and ‘Doc’ Harden, in particular, has been an inspiration and is worthy of a book in itself.

For details of the book and to read an example chapter visit my website. To order a copy, click on the link to Amazon or check out The History Press website.