It promised to be an emotion-charged day. And so it proved as Julie Wells fulfilled her own mission of remembrance by gifting all her father’s wartime correspondence to her mother to the nation.

I was privileged to be invited to join Julie and husband Bob for the presentation to Anthony Richards, head of the Imperial War Museum’s outstanding archive of documents and sound records. 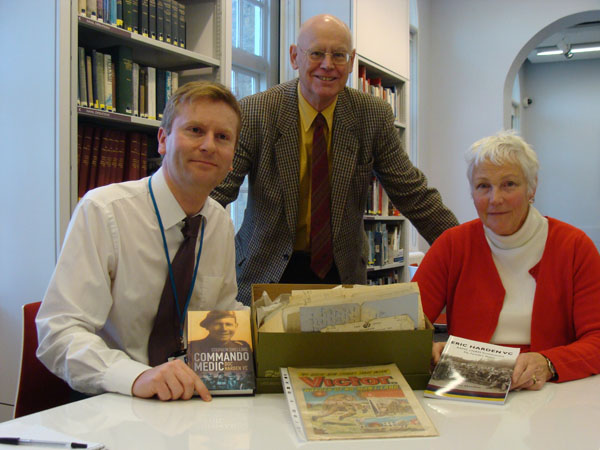 For Julie, it meant surrendering the treasured papers which had given her a first real insight into the father she never knew. It was, as she told, Anthony, one of the hardest decisions she had ever had to make, but it was also one that she knew in her heart of hearts had to be done.

Many of those letters, which make up the core of my latest book, Commando Medic: Doc Harden VC, were written in pencil on tissue-like war economy paper, and they are now beginning to fade with age. Before embarking on the journey to London from her home in Norfolk, Julie had explained her great fear that they could literally turn to dust.

“They need tender care,” she told me. “Without proper conservation they could crumble away which would be terrible.

“I’ve been lucky enough to have them and learn so much from them. I don’t need them any more and rather than have them stuck here, slowly disintegrating, where no one can see them, I think it’s important that they go to a museum where they will be preserved and where a younger generation can read about what impact the war did have on ordinary people’s lives.”

Anthony agreed and, in receiving the extraordinary bounty of correspondence, photographs and ephemera, he assured Julie and Bob that the letters would be conserved and, where necessary, restored so that they could be saved for researchers to make use of.

Those that do just that will be in for a rare treat. Having been fortunate enough to have read them while writing my book I can honestly say that in more than 30 years of researching the lives of Victoria Cross recipients I have never ever seen such a wonderfully rich run of personal letters so full of fascinating human insights. What makes them rarer still, in my estimation, is that they were written by an ordinary ranker rather than an officer.

For Julie, the act of leaving them in the care of the Imperial War Museum was evidently a wrench, but deep down, I suspect, she felt that, at last, a weight had been removed from her shoulders as the burden of responsibility for preserving these important documents which her mother had faithfully kept had been safely passed on.

On a personal level, it was good also to meet up with two RAMC Association stalwarts, Pat Higgins, who was such a help to me during my research, and Terry Hissey, who shares my passion for Victoria Cross and George Cross research and who is himself the author of two books on recipients of the GC.

The day itself was rounded off in convivial surroundings, in the Union Jack Club, where Bob, Julie and I were guests of Pat, in a restaurant appropriately situated next to the impressive Victoria Cross Gallery where the photograph of Doc Harden is displayed next to two of the most famous of all medical heroes – the double VCs, Arthur Martin-Leake and Noel Chavasse.