It remains an abiding memory of an unforgettable brief encounter with Fred Harris. We’d spent a couple of hours together; he reminiscing and me listening and taking notes for my book on his old comrade, Eric ‘Doc’ Harden VC.

Although frail and ailing, he was in good form. The jokes were plentiful and the stories poured across a table strewn with yellowing papers and faded photographs that recalled days of his youth when, as a young and able Royal Marine Commando, he struggled ashore on D-Day and came perilously close to death on a snow-carpeted potato field in Holland.

At the end, he insisted on accompanying me out onto the roadside to where I’d parked my car. As I drove away, I could see him in my rear-view mirror, a bent figure, in a green beret and commando jersey, waving me farewell. 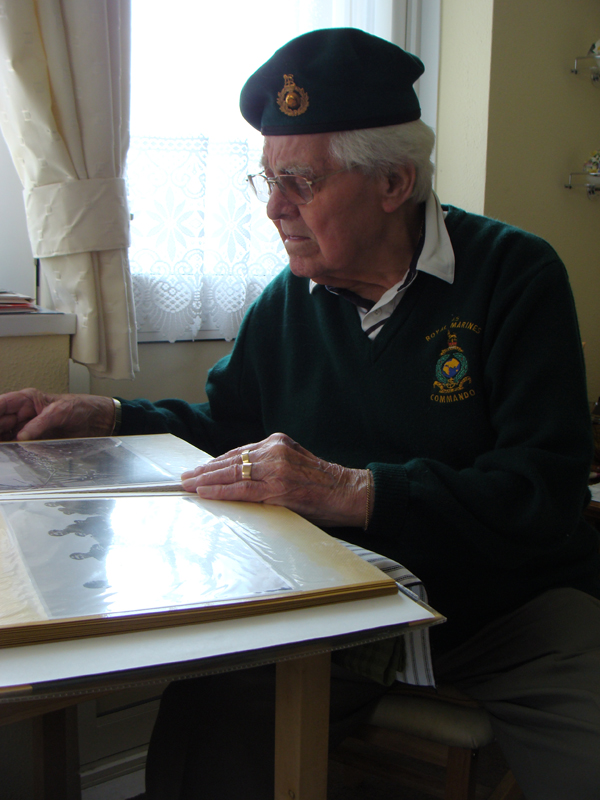 Fred Harris last year, at home with his memories.

Although I couldn’t have known it then, it would be last I would ever see of him. During the months that followed, as I began the task of writing the book, we spoke again on the telephone, but we never had the chance to meet again. I had hoped that we might have caught up again in London when I accompanied Julie Wells (nee Harden) to the Imperial War Museum to present her father’s letters to the Department of Documents. But, sadly, Fred was not well enough to travel.

I comfort myself now with the thought that at least I was able to ensure that he received a copy of the book to which he had contributed so much. We spoke briefly on the phone about it and, as ever, Fred was generous in his praise. I recall making some vague comment about hoping that the book would stand as a tribute not just to Eric’s extraordinary valour, but to all the men who fought and died with 45 Royal Marine Commando during its struggles in Normandy, Holland and beyond.

I was thinking, in particular, of men like Fred and his old pal, Derrick Cakebread, who had shown such faith in me and given their unstinting support to a project which had taken far longer to complete than either they or I could ever have imagined.

I remember thinking it typical of him that he should have dismissed such a notion and quickly changed the subject.

I am quite certain that in his own mind he never for a moment considered anything that he had done to have been exceptional. That doesn’t mean he wasn’t proud of his service. He was. In fact, he was, I suspect, prouder than most about having been a Royal Marine Commando – and rightly so.

He revelled in the comradeship born of shared endeavours and hardships that had had lasted a lifetime. He was a regular attender of reunions and he loved to reminisce. More than anything, he liked to recall old friendships, too many of which had been cut short by the war.

And he was an excellent raconteur.

Talking with him across his small living room table with spring light flooding in was a delight. Not that I did much of the talking. In fact, as I recall, the conversation was rather one-sided, which was fine by me. I had come to hear his story after all. The interview was a bit like turning on a tap. The memories flowed easily. I cannot remember asking more than two or three questions all afternoon.

Most of what he spoke about concerned ‘Doc’ and the skirmish at Brachterbeek in January 1945 which resulted in the posthumous award of the Victoria Cross to A Troop’s much-loved medic. But there was also a story about himself, about his undignified and very nearly fatal introduction to the war on the grey, wind-blown morning of D-Day, June 6, 1944. 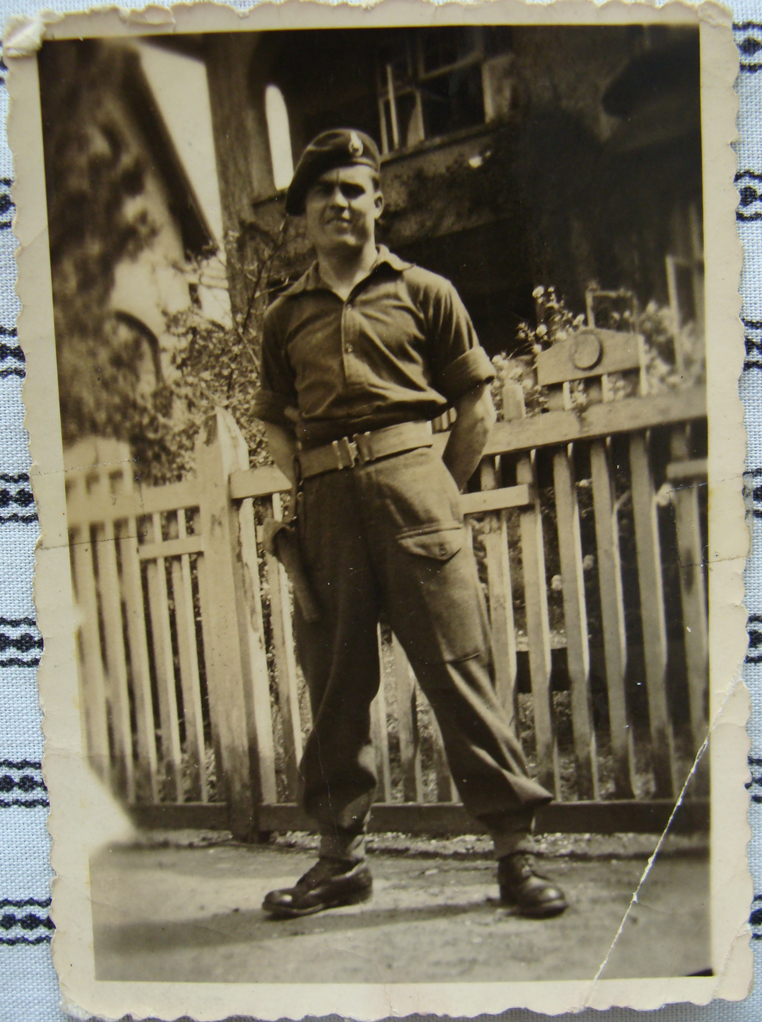 Marine Fred Harris, at the end of the war.

On that spring afternoon last year, he made light of it, but there wasn’t much to laugh about at the time. In a short memoir of his wartime experiences, he recounted what was, quite literally, a harrowing baptism of fire as landing craft LCI 530 closed the Norman shore:

‘The noise was horrendous. Shore batteries and naval guns exchanging fire, aircraft circling and returning from bombing trips, smoke and the smell of cordite filled the air. Shells whistled overhead and tracer bullets cut through space…

The ‘run-in’ was completed on a light swell, in about three feet of water at the end of the ramps. The swell, however, tended to swing the ramps and made them unstable and many of us got a ducking… There was no time to hang about. If you didn’t jump off, you either fell off or were thrown off…

I ran down the ramp, tripped and went over into deep water. My section sergeant, ‘Dolly’ Gray, saw my plight, yanked me to my feet and dropped me on the beach. I was like a tortoise on my back. With a few press-ups I managed to get to my feet, water running out from all directions…’

Such was merely the beginning of a long day in a very long campaign which, by some miracle, Fred came through. The luck that had been with him on Queen Red Beach stayed with him through the bitter fighting for Franceville Plage, the scraps around Le Plein and the costly clash at Brachterbeek.

He had lived to tell the tale and there were few who told it better.