Life throws up some strange surprises; unlikely associations that seem to come together by some weird osmosis. Such is my connection to a man who deserves to be counted among the ‘bravest of the brave’.

His name is Bhanbhagta Gurung and I should say straight away that we have never met, though I wish we had.

My first encounter with him was, like so many children of my generation, through the pages of The Victor comic. Way back in 1963, when I was not quite yet seven years old, I saw him, almost literally leaping out from the front page as he brandished his kukri and, with the classic speech bubble cry of ‘Ayo Gurkhali’, set about capturing a Japanese-held hill almost single-handed.

Entitled ‘The Knife They Fear’, the story of Bhanbhagta Gurung and his heroic capture of a string of enemy machine-gun posts on Snowdon East during the Third Arakan campaign was my introduction to the fighting prowess of the Nepalese hillmen that has become the stuff of military legend. 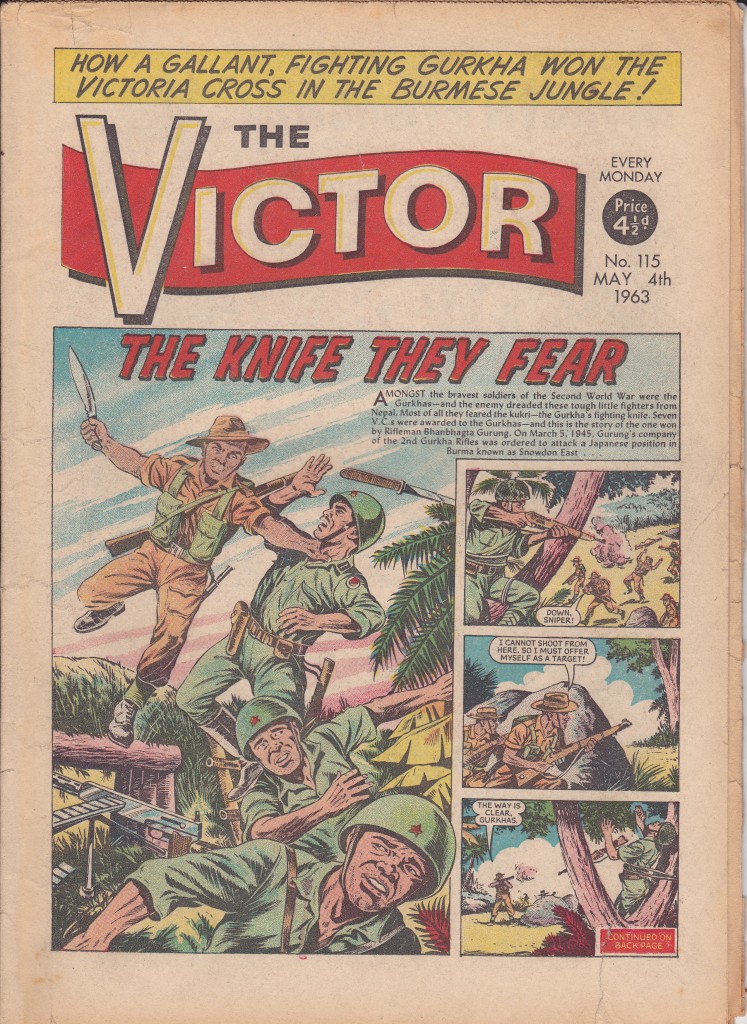 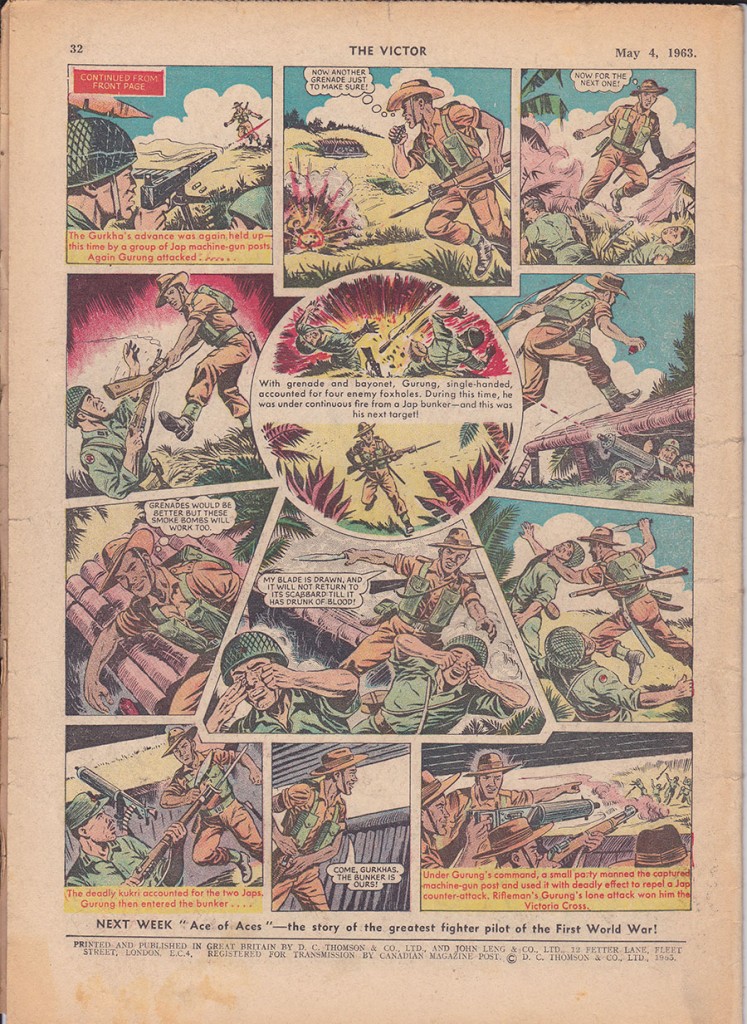 Some four decades later, I had the great good fortune to interview Field Marshal Sir John Chapple, former head of the British army and a veteran Gurkha officer. I had gone to meet him at his Norfolk home to discuss plans for a Gurkha Welfare Trust fund-raising event, but it wasn’t long before we had diverted onto the subject of tales of derring-do.

It emerged that Sir John had served in Bhanbhagta Gurung’s old regiment, the 2nd Gurkha Rifles. Not only that he had photographs of the hero, taken at a post-war reunion when the Burma campaign Victoria Cross recipient met up with the unit’s other VC holder, Subedar Lalbahadur Thapa who earned his award during the fighting in North Africa.

Even allowing for the passage of time, Bhanbhagta Gurung bore little resemblance to his comic-strip incarnation, but that was of less surprise than the unexpected discovery of the photo itself. 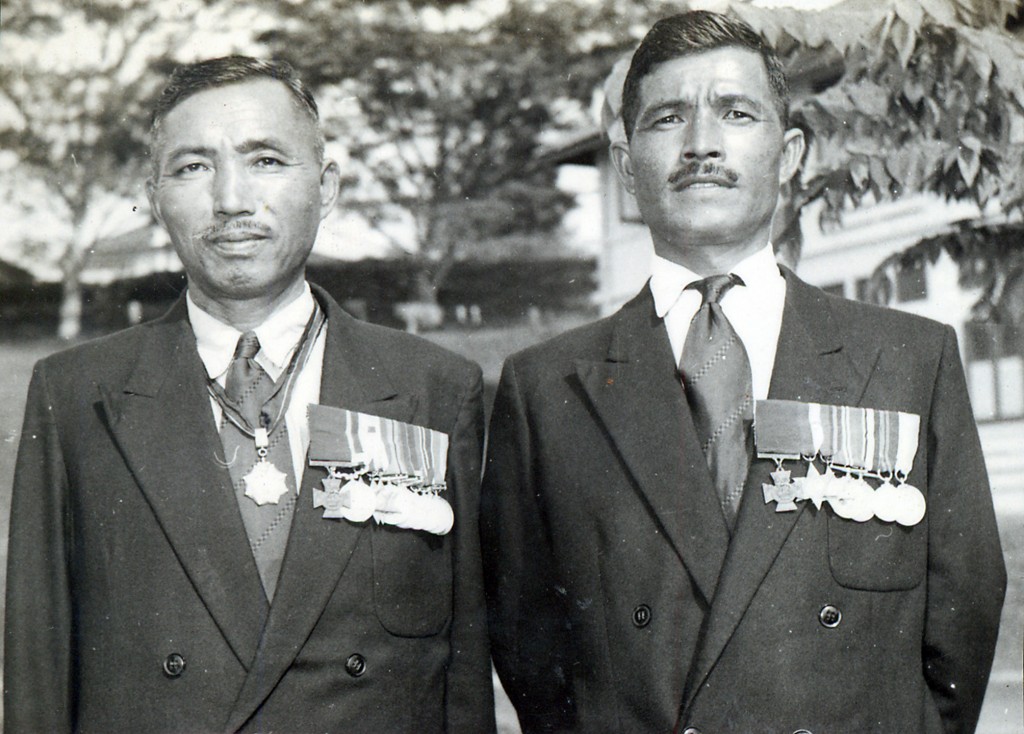 And now, years on from that meeting, the two contrasting images of a Gurkha hero in peace and war are being brought together to illustrate an account I am writing about one of the most remarkable and most influential displays of individual bravery performed by any soldier of any army during the Second World War.

Based on my correspondence with Colonel Dominic ‘Nick’ Neill, OBE, MC (1921-2000) during the 1990s, the story concerns not just Bhanbhagta Gurung but an incredible company of men: B Company, 3rd Battalion, 2nd Gurkha Rifles, and their desperate efforts to wrest control of a bunker-riddled hilltop stronghold in Burma in March 1945.

‘Nick’ Neill was the company commander and his pride in the great valour displayed by his men was plainly apparent in the vivid and intensely moving narrative he sent to me. 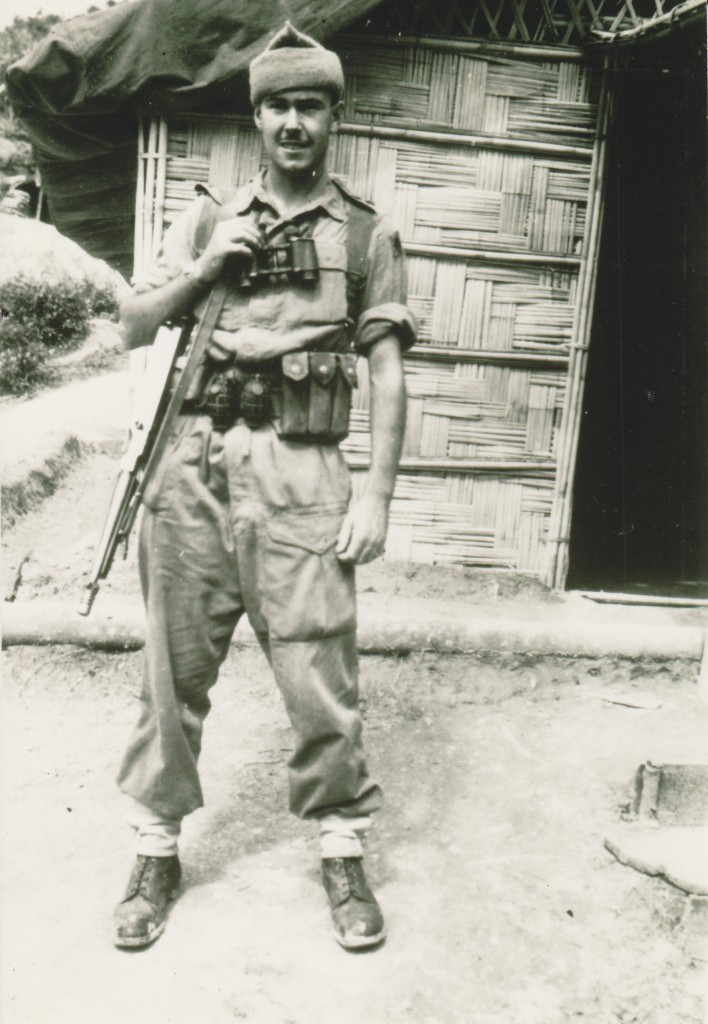 Reading it, there was no question that Bhanbhagta’s action had been the most spectacular among a whole series of individual acts of gallantry. After all, at a time when it appeared as though the attack had stalled, he had leapt forward, braving murderous fire, to destroy with bayonet and grenade four enemy posts before going on to capture a machine-gun bunker in which he used his kukri and a convenient slab of rock to kill its crew. Then, as if that wasn’t enough for one day’s fighting, he had played a prominent role in defeating the Japanese counter-attacks that came their way.

But what came as something of a surprise, not to say shock, was Neill’s belief that the man most responsible for turning ‘what might have been defeat into victory’ was not Bhanbhagta but a little-known section leader, Lance-Naik Chamarsing Gurung, whose story had never been rendered as comic-strip heroics.

According to Neill, it was the bravery shown by this young Gurkha which ‘triggered off a series of other actions [Bhanbhagta’s among them] which resulted in the Japs being flung off our objective’. This is how he remembered it:

‘Lance-Naik Chamarsing Gurung rose to his feet and, yelling obscenities at the Japs above him, started clambering up the hill in the face of showers of grenades and very heavy rifle and LMG (light machine-gun) fire. Urged on by the screams of encouragement from the men in his section and platoon, Lance-Naik Chamarsing ran up and up the hillside, spraying ahead of him with his tommy-gun, changing magazines for full ones as they became empty. He was hit by goodness knows how many bullets as he reached the first enemy trench, but he stumbled on, squeezing away at the trigger of his SMG (sub machine-gun) until he fell dead across the lip of the Jap trench. Chamarsing was the first man on Snowdon East that afternoon…’

Fired by the section commander’s self-sacrifice, the remnants of B Company performed prodigies of heroism which eventually resulted in them being showered with decorations. As well as Bhanbhagta’s VC, they included an Indian Order of Merit, three Indian Distinguished Service Medals and six Military Medals.

Incredibly, there was nothing for Chamarsing Gurung even though it was he who, in Neill’s words, supplied ‘the inspiration and the true leadership’ responsible for turning the tide of battle in the Gurkhas’ favour.

Rarely can there have been such a clear oversight in the distribution of awards, but at least Chamarsing’s courage is no longer forgotten and now whenever I picture in my mind’s-eye Bhanbhagta leaping to comic-strip glory I shall spare a thought for the faceless Gurkha whose unrecognised bravery spurred him on to feats of battlefield heroism which have been rarely matched and seldom if ever surpassed.