Maybe it’s a sign of advancing age, but it’s strange how often these days that a new project seems to stir memories of past encounters.

Take my latest venture: an article for Britain at War Magazine to mark the 75th anniversary of the daring raid on St Nazaire later this year. Even as I was piecing together the epic story of Motor Launch 306 and her desperate battle with the German destroyer Jaguar, I found myself drifting back to my childhood and what must have been one of my earliest brushes with the extraordinary events of March 1942.

It came via the first-ever Victor annual which I received as a Christmas present from my nan back in 1963. With its cover adorned with Tommy-gun wielding commandos spilling over the bows of the Campbeltown and charging through the docks, I remember being utterly gripped by its graphic rendering of Operation Chariot, the audacious and ultimately successful effort to deny the world’s largest dry dock to the Nazi navy and, in particular, the battleship Tirpitz.
More than half a century on, and with the benefit of much wider reading, I can see that the comic-strip version, only slightly fictionalised, was based in large measure on C E Lucas Phillips outstanding record of the operation, which had been published just five years before under the title of The Greatest Raid of All. 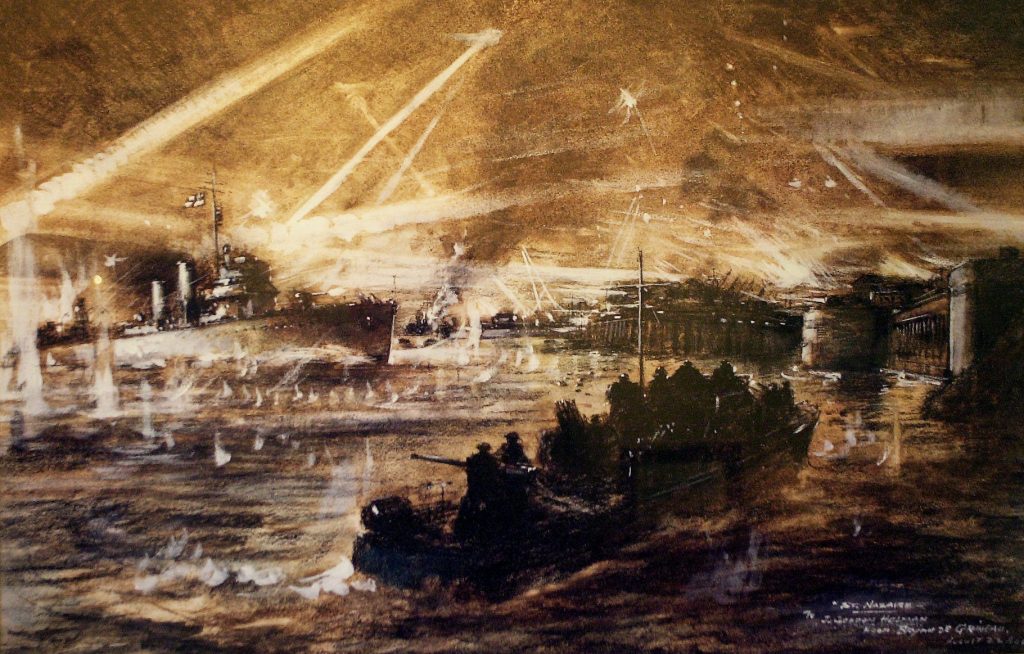 Artist’s impression of Campbeltown’s charge towards the Normandie dock

Charles Newman, the military commander and CO of No 2 Commando later awarded a richly-deserved Victoria Cross for his magnificent leadership, featured prominently in the story, as did ‘Sam’ Beattie, the captain of the converted Lend-Lease destroyer, who courageously and skilfully steered his ‘wreck ship’ crammed with explosive through a blizzard of fire into the dock gates.

Though not named, Norfolk commando Ron Butler was another of those whose exploits were covered. He was depicted as one of the demolition team commanded by Lieutenant Stuart Chant that blew up the port’s pump-house which involved a desperate race against the clock to escape the effects of the explosion.

It was, by any standards, a remarkable feat of bravery which resulted in Ron being awarded a Military Medal some three years later following his return from captivity. And it still gives me goose-bumps when I listen to his ghostly voice on tape as he recounts his journey down the river Loire, bordered on each side by enemy gun positions and backed by thousands of enemy soldiers.

Crouching behind specially constructed iron shields set into the deck of the Campbeltown, he could do nothing but wait while the navy tried to fool the Germans into believing they were a ‘friendly’ force returning to base.

This is how he remembered it:

It was only at this particular time of year we could go over the mudflats. We actually touched bottom twice. You could feel it… We were ‘talking’ [by way of signals] to the Germans all the way upriver. We were flying the Nazi swastika and searchlights were on us. You could have read a newspaper [by them]. I laid behind the bridge and I could hear Beattie saying, ‘Send the signal of the day again… Send it very slowly’ and then, ‘Tell them we are a German patrol. We have had a battle in the Atlantic and are coming in for repairs. Tell them very slowly. Time is of the essence.’

Then, as a last resort, Beattie said to tell them to ‘have ambulances ready, we’ve got wounded aboard’.”

Not long after the Old Mole was illuminated by the searchlights and shortly after that, the Germans, having finally realised what was happening, opened fire. Ron’s story continues:

‘Down came the swastika… up went the white ensign. You did feel proud. Everyone opened fire. The covering parties – the lot! The Germans opened up with their heavy guns. The shells were going right through the ship and exploding the other side. We were so close… Anybody who isn’t frightened [in situations like that] is an idiot… We were now going to hit the dock gates. We hunched up. We expected a terrific shock. Beattie hit it flat out, but we got the surprise of our lives. We felt her ride the torpedo boom as she went into that dock and we didn’t feel much of a shudder…’ 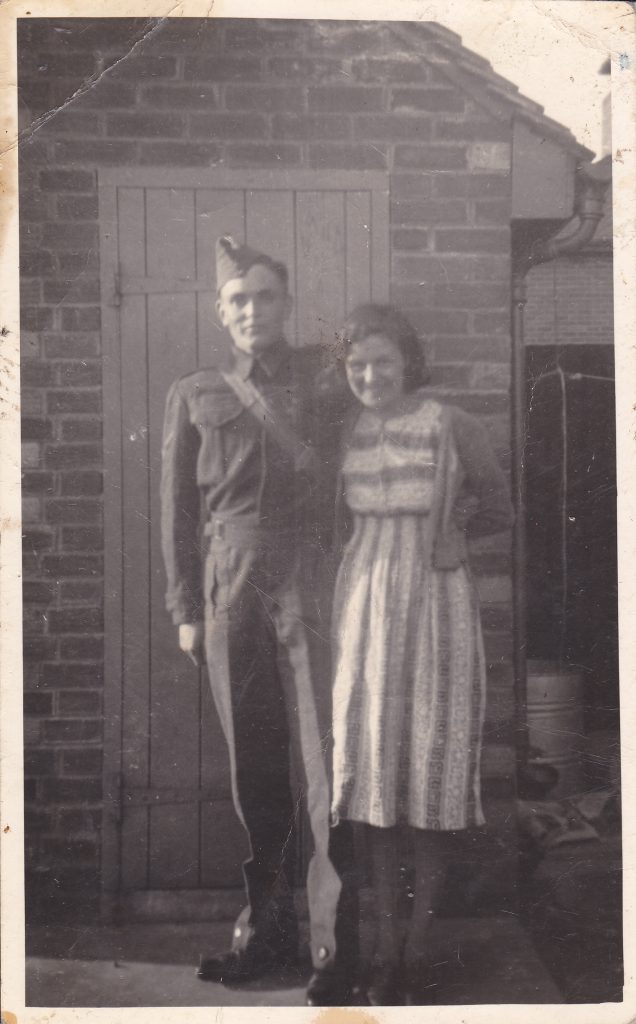 Scrambling over the ship’s now stationary bows and onto the dock, they raced for their target – the port’s pumping station. A covering party of commandos cleared the way and within minutes they were inside, clattering down steel stairways to their objective. Ron recalls:

‘The pumping station wasn’t too far away, about a couple of hundred yards. It was situated on the edge of the dock for the emptying and refilling of the dock… It was a beautiful place. There was just a soft hum of machinery with a light shining in the office… We got stuck in straight away…’

With a wounded man guarding the approach, the rest of the demolition party got to work:

‘We had torches [but] it was an eerie experience. We hoped we wouldn’t take the wrong gangway [and, eventually] we landed up at the bottom floor where these four massive, slug-like pumps were situated and there we all laid our charges and connected them up…’

After that it was a sprint to get out of the pump house before the explosive detonated. Ron was last man out, assisting his wounded comrade out of harm’s way. Not long after, the building was rocked by what Ron called a ‘terrific roar’.

With the destruction of so many motor launches making an evacuation by sea impossible, Ron then joined the fight inland as the commandos attempted the seemingly impossible task of breaking out of the German-held port to reach the countryside beyond. To escape the docks, they had to pass over a bridge covered by enemy troops. On the tape, Ron recalls:

‘They should never have allowed us to get over that bridge. There was a pillbox at the other end, and our chaps got across and put hand grenades in and we piled across.’

He found a German truck on the other side, but when he got in found it had been immobilised:

‘Round the corner came a motorbike and side-car with a machine-gun in the side-car opening up. He didn’t last very long. I [then] went over a wall and fell into a chicken coop.’

Caught in a tangle of netting with chickens squacking after him, he ran up the garden path into the house where he sheltered. Eventually, he made his way, street by street, to a small copse where he found around 15 wounded men together with an officer. Together, they helped them into a nearby house and were busy treating their injuries when a German search party burst in.

It was the end of Ron’s stout-hearted resistance, but not the end of the raid’s myriad achievements. A few hours later, with the captured commandos gathered together in a pre-war seaside hotel at nearby Le Baule, there was a deafening explosion that signalled the end of the Campbeltown and the final success of their mission. 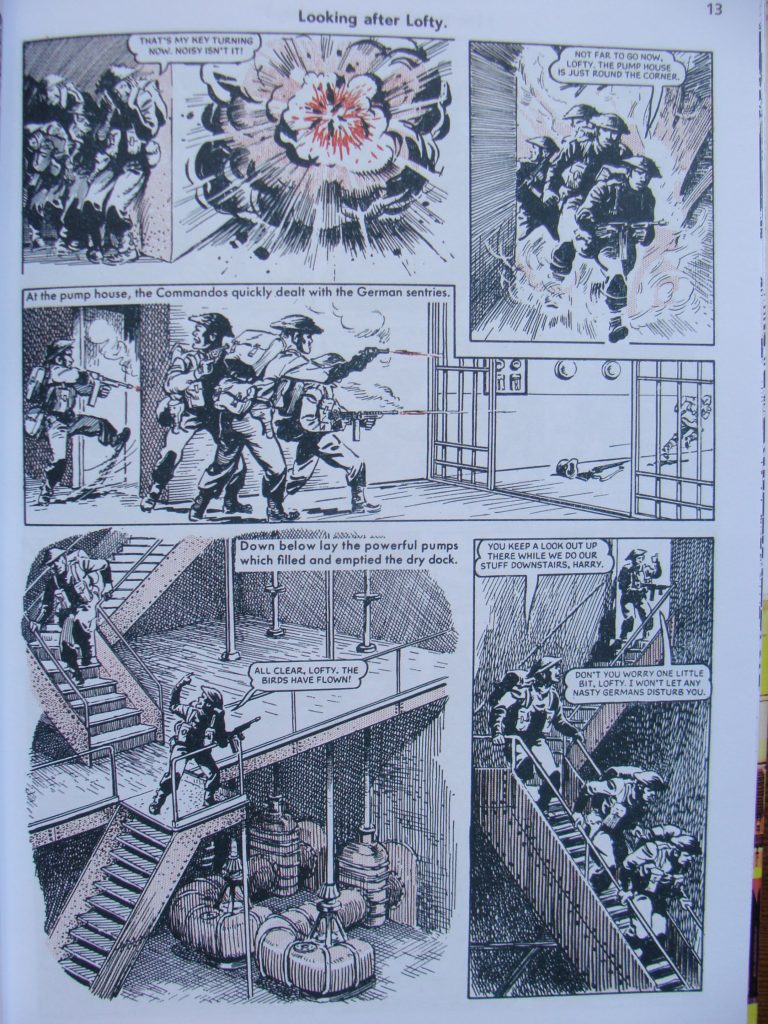 So ended ‘the greatest raid of all’, a saga of outstanding courage against the odds which was recounted with such matter-of-fact modesty in an interview that remains one of the highlights of my 40 years in journalism.