With the 70th anniversary of the opening salvo in the Baedeker blitz on Norwich almost upon us, the local media is mobilising its resources to mark this most sombre and sobering of milestones.

Derek James, one of the most respected of all journalists in the city, is no stranger to the story. Some years ago, he researched and wrote one of the most impressive newspaper supplements on the subject, and in recent weeks he has returned to the blitz saga with the promise of more articles to come in the Evening News.

Radio Norfolk is planning to commemorate the city’s ordeal by fire tomorrow (Friday, April 27) with a news item on the breakfast show. About Anglia and Look East, meanwhile, are scheduling their own reports about the bombing attacks that forever transformed the face of Norwich tomorrow evening.

The aerial assault on Norwich has also received national coverage in the form of an article on the Daily Mail’s news website: Click here to read the article – you should see more photographs from the magnificent George Swain Collection taken from my book, Norwich: A Shattered City.

If you want to get a closer view of the way the raids helped re-shape the city then you can take your own walk along the once-blitzed streets or, better still, join one of a number of guided tours being held in coming days.

As well as those being conducted as part of the Norwich Arts Centre’s open day on Saturday (see my previous blog for full details), there’s a blitz walk along St Benedict’s Street next month by Anna Sandfield and Louis Hoing, from the Hethersett-based Time Travel Team.

As air raid wardens Winnie Wiffen and Jack Whiffler, they will whisk people back to the dark days of 1942, blending historical fact, eyewitness recollections and music along the way.

Interviewed by Emma Knights of the Evening News, Anna says: “We just want to give people a little bit of a flavour of what happened and help them learn a little bit more about the history of the city they live in. Our walk with the air raid wardens is a little slice of Norwich in 1942, the raids and the bombings and also life on the home front. If things like this are not remembered now, then they will become lost in the mists of time.”

The walk was inspired by a photograph which appears in my book of a man standing at the St Benedicts Street crossroads with Grapes Hill and Dereham Road, in what appeared to be an enormous crater following the bombings. 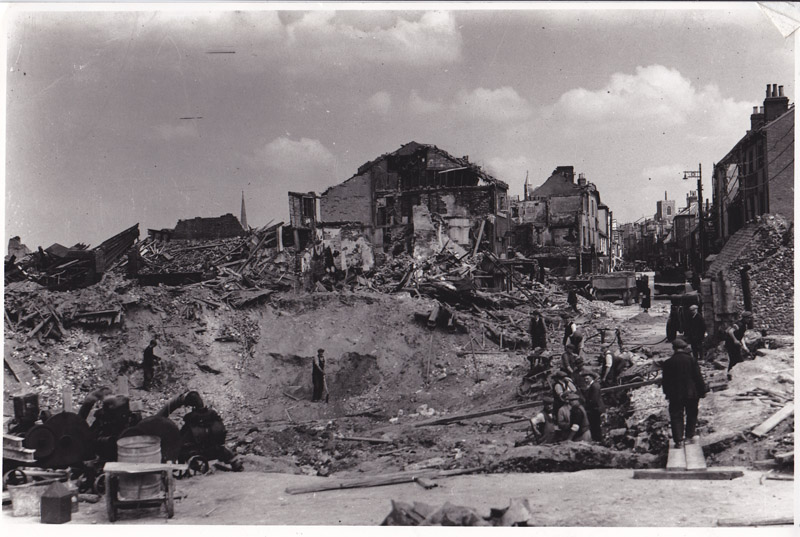 St Benedict's at the junction with Grapes Hill and Dereham Road

Time Travel Team’s A Walk with the Wardens plus Stories and Music from the Home Front is next being held on Wednesday, May 9. It starts at 7.30pm at The Plough in St Benedicts Street. Tickets cost £5. For more information visit www.timetravelteam.co.uk.